How Volunteering Can Benefit Parents in Athletics.

Have you ever stopped to consider the amount of time you spend sat/stood at your child’s athletics track and wondered whether that time could be used more productively? Well, it turns out there is something that you just might want to consider…

Becoming a coaching assistant, coach, or official has never been easier as England Athletics now put on regular courses throughout the year with many clubs contributing to course costs. For example, their "Leading Athletics" online qualification is "perfect for parents who want to take their first steps into volunteering and leading"; this only costs £20 and consists of 2x1.5hr online workshops with other likeminded people.

With the workforce required to make training sessions happen being almost exclusively made up of volunteers, and with a natural coming and going of parent-volunteers as young athletes leave the sport or move away, clubs are always appreciative of new willing-to-help faces, be that with coaching or with officiating at events.

NOTE: HELPING OUT REQUIRES NO PREVIOUS EXPERIENCE AND CAN BE SO MUCH FUN!

Not only does qualifying as an athletics leader, coaching assistant, or coach help out your club, it could also provide you with: 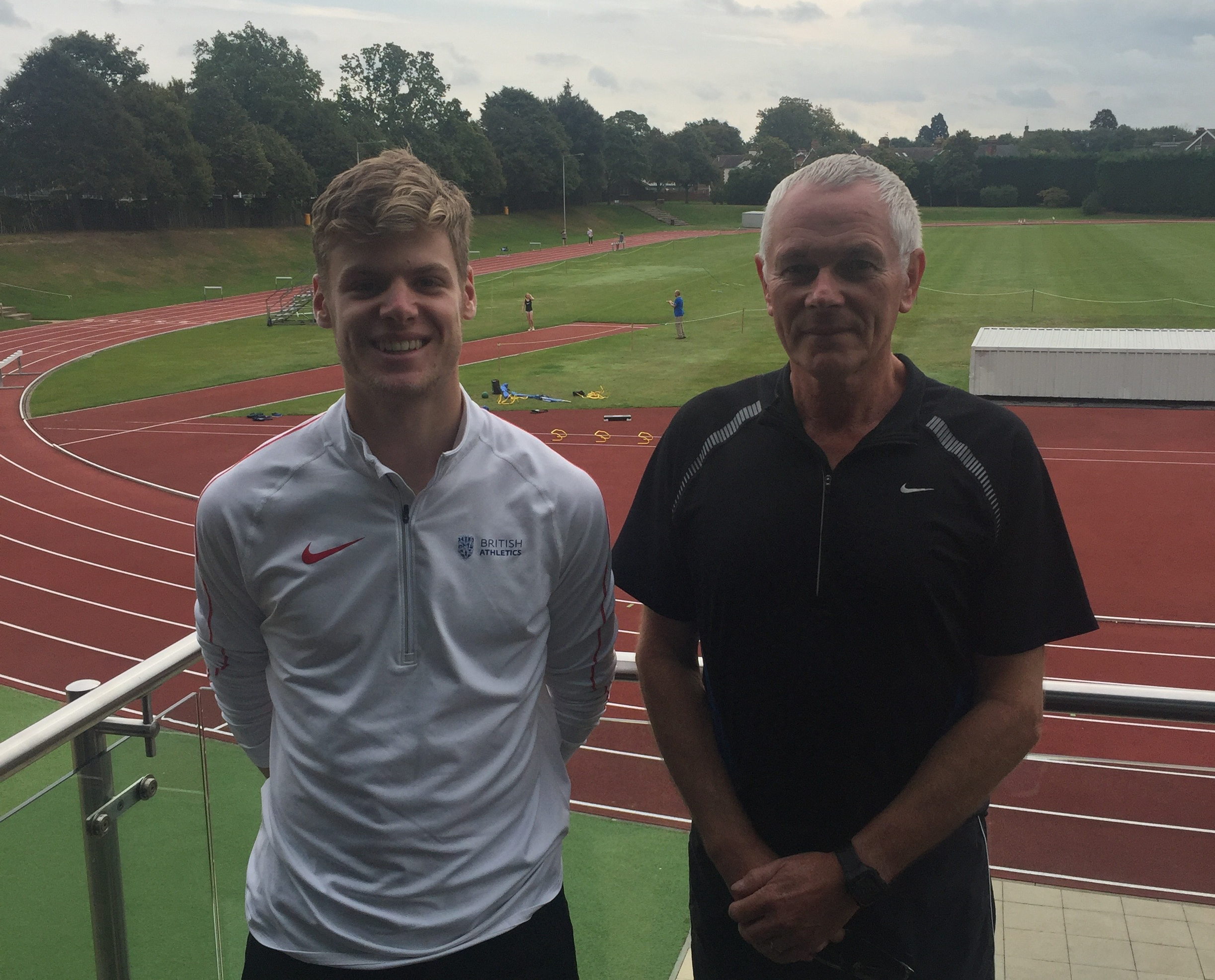 With the exception of Christmas and the odd week away, every Tuesday and Thursday evening and many Sunday mornings were spent at the track, it became the new normal. Initially, I sat on my own on the grass bank, passively watching but then got talked into joining a group of other mums who would retreat to the really rather comfortable on-site café that our club was fortunate to have use of. Although I enjoyed the usually hilarious café conversations, I became very aware that I was seeing none of Joe’s training sessions and was relying on him to tell me about improvements, difficulties, and other session-related stuff, in the car on the way home. I realised too that I was really missing out on something that I personally and genuinely enjoyed, watching my child doing what he loved doing and the training process itself.

At this point I overheard someone talking about coaching/officiating courses that us ‘mere mortal’ parents could sign up for on the England Athletics website and decided to investigate. Before I knew it, I had signed up for the initial coaching course to be held at the club a few weeks later… the journey had begun! This course provided an introduction for parents who just wanted to help out, covering basic organisational and people skills. Although it provided only very limited technical information, it did ignite the spark and before I knew it, I’d signed up for the next course, that of coaching assistant, run over a weekend at Ashford’s Julie Rose Stadium. By now I had started to take a far more detailed interest in everything about the training process and the technical aspects and was also becoming increasingly interested in the psychology side of sport. 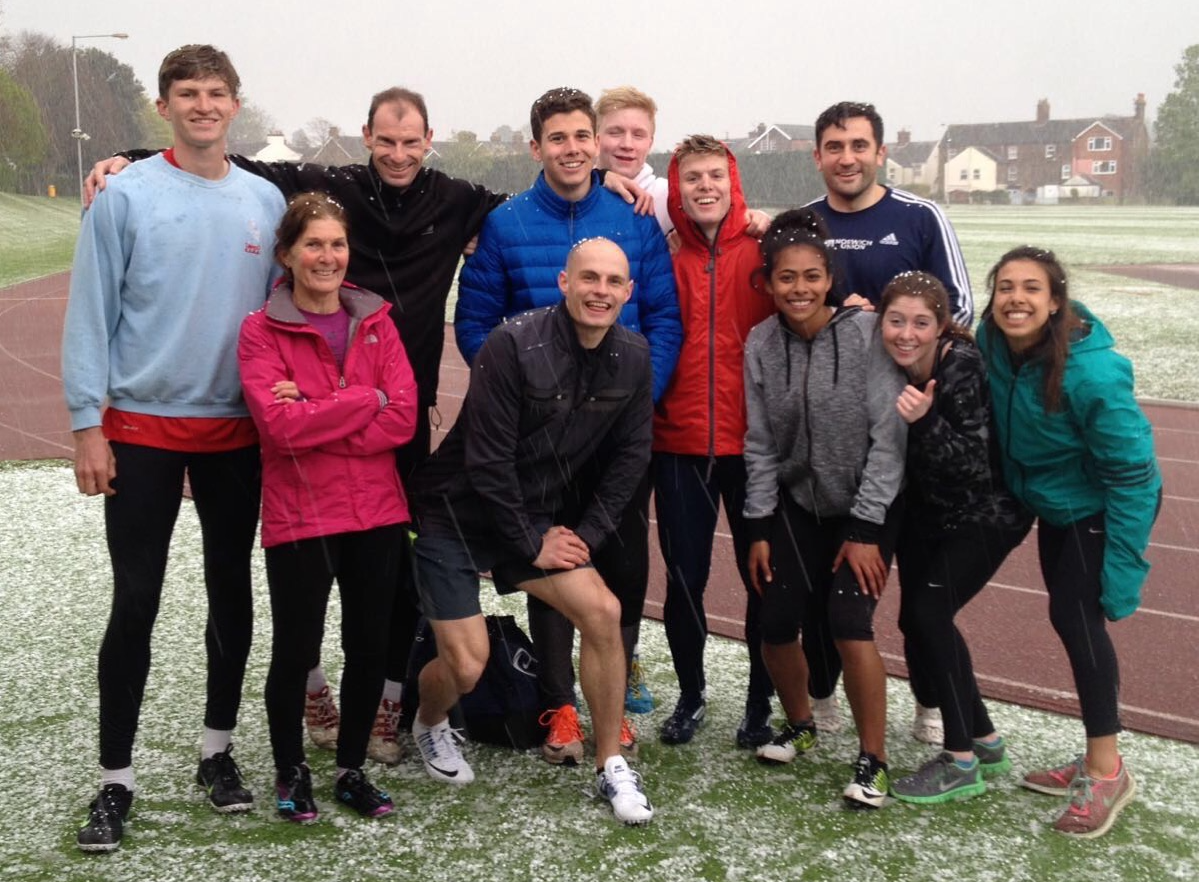 (The amazing training group I was coaching assistant for that featured 7 international athletes across various sports and ages (taken on 26/04/16!!!)

Thinking back, I was very lucky in that Joe’s training group was an established high-level group, comprising numerous athletes who had already represented England and GB, and we even had a GB bobsleigh athlete! Motivation in this small group of 10 or so athletes was sky high, and it was a privilege for me to be involved, in my own small way. My role was stopwatch operator, hurdle-put-away-er, and general motivator, counsellor, and surrogate mum! I loved it though. At the time, if I’m brutally honest, it was also a personal lifesaver… I was going through a very dark time mentally and the routine that training provided plus, importantly, the sense of belonging, purpose, and of feeling useful, was absolutely crucial for me surviving those years.

I didn’t ever get round to the full coaching qualification, maybe one day ….

Fast-forwarding this story, doing that initial coaching course and the newfound interest in the psychological aspects of sport, ultimately resulted in me going back to university at the age of 55 to study sport and exercise psychology, when Joe left home to start his own university life. Who’d have thought that an England Athletics coaching course could have facilitated a complete career change?!

(Sunset at Tonbridge AC, where we spent many a cold and rainy night!)

If you would like to become more involved at your own club and want to know more about the courses on offer:

England Athletics: Get Into Coaching.